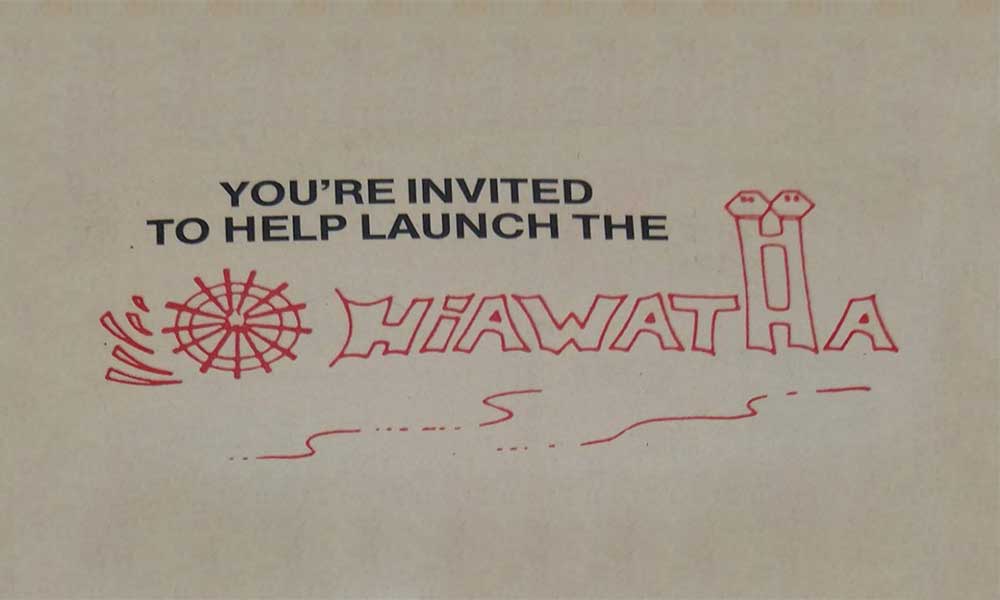 A Community Project of the Williamsport-Lycoming Chamber of Commerce & the Citizens of Lycoming County Pennsylvania.

The Hiawatha is the old-fashioned paddlewheeled excursion boat that will ply the waters of the Susquehanna River beginning in the Summer of 1982. The wholesome appeal and the promised adventure of a ride on a riverboat may be the delightfully simple reason why The Hiawatha has won the hearts of so very many Lycoming Countians. It’s why hundreds of people from all walks of life have called the county Chamber of Commerce and volunteered their services, donations, and spirited enthusiasm to “HELP LAUNCH THE HIAWATHA!’ 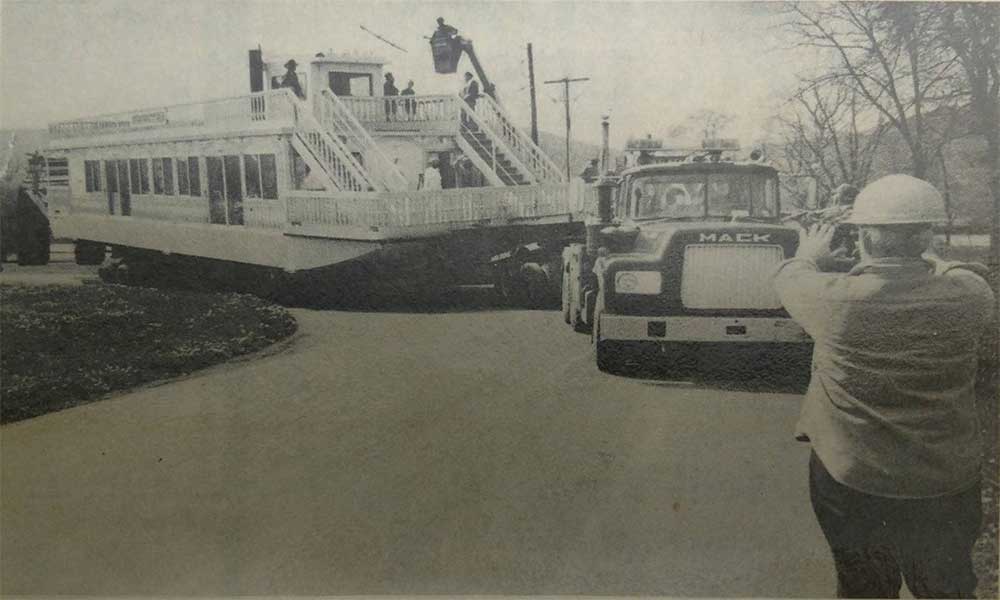 Hiawatha was on its way to being eased into the Susquehanna River from its winter “home” in a field near the Antlers Club today. The simulated paddlewheeler was moved atop a flatbed tractor-trailer truck. Utility crews listed their lines, upper center, to allow the boat to pass underneath without snagging them. The Hiawatha’s first charter excursion of the season will take place Saturday. 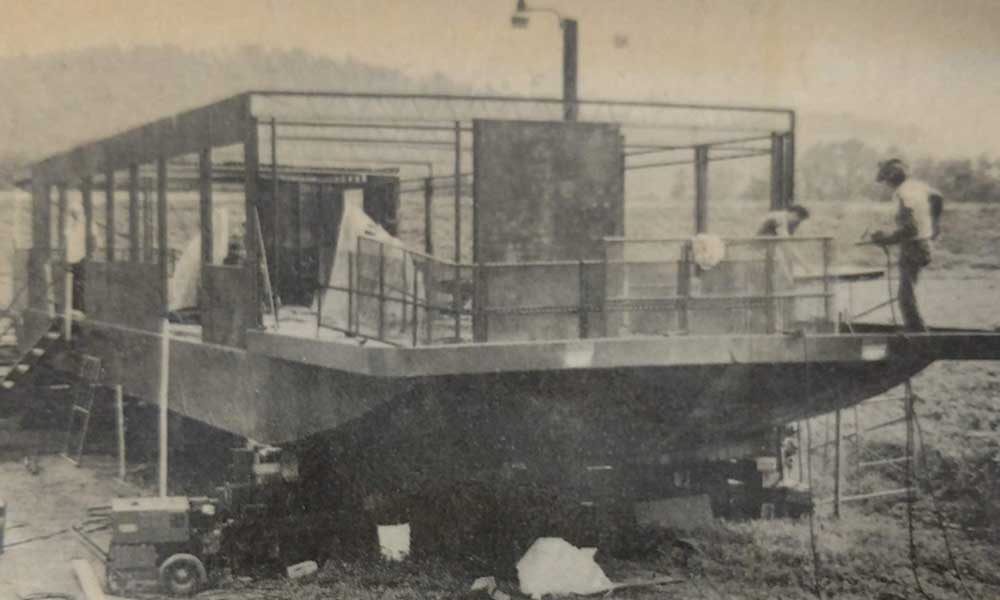 Work is progressing on the Hiawatha paddle wheel boat being constructed at the Antlers Club. Owen Stine, supervisor of the construction and future operator of the boat, in left background, surveys side panels welded into place.

Miss Erin Walsh, travel development director for the Williamsport-Lycoming Chamber of Commerce, reports workers are pushing to have the boat ready for a July 23 booking. She said 20 tours have been booked so far. 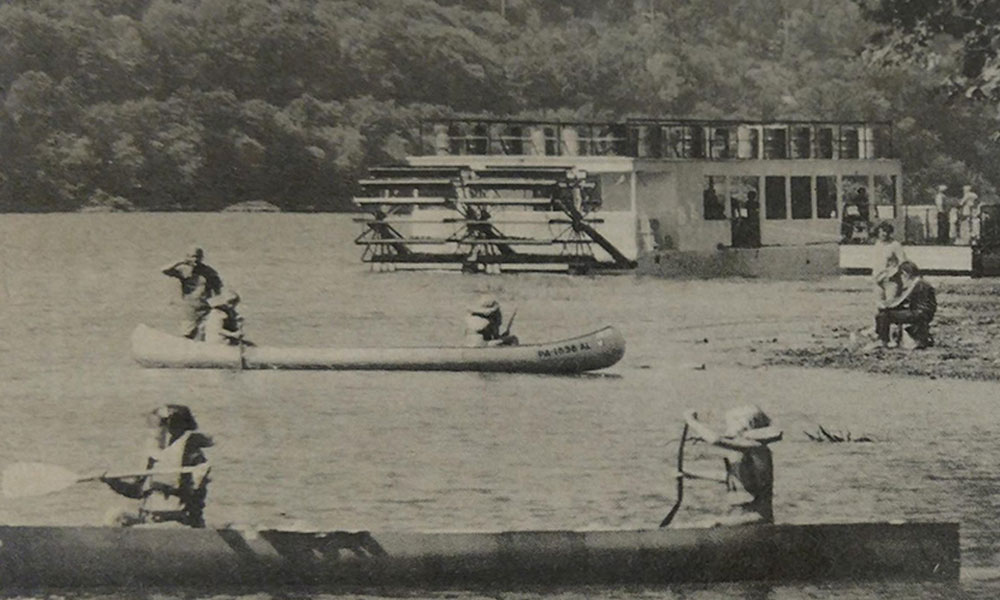 It was a long, aggravating day for the people behind the Hiawatha project, but just as the sun was setting on their hopes, the excursion boat’s mechanical problems were solved and it embarked on its maiden voyage to the cheers and applause of scores of bystanders who waited all day to see the vessel floating in the Susquehanna River.

The Hiawatha was backed into the river at the Antlers Club late yesterday morning, but the boat spent the next eight hours sitting half in and half out of the water as workers tried to figure out why its engines would not operate. The engines were not tested beforehand because they use the river water for cooling.

Hundreds of area residents patiently sat along the riverbank throughout the day to witness what many considered to be a historical event – the launching of a paddlewheel boat. That moment, however, was delayed by air leaks in the boat’s diesel fuel lines. The leaks did not take long for the volunteer workers to correct. What took so much time was determining what was the problem.

There also had been numerous other difficulties in getting the partially-completed vessel afloat, but they were all contended with and were quickly forgotten once the 60,000-pound boat was finally moving downriver to its land base at Susquehanna Park.

The Hiawatha, not yet outfitted with running lights, was escorted downriver by about 10 boaters as a dozen or more grinning workers enjoyed the Hiawatha’s maiden trip with a smiling captain, Owen E. Stine, at the helm. Also taking the trip were Donald G. Holtzman, an official of the Williamsport-Lycoming Chamber of Commerce who originated the boat idea, and Miss Erin Walsh, the chamber’ travel development director. 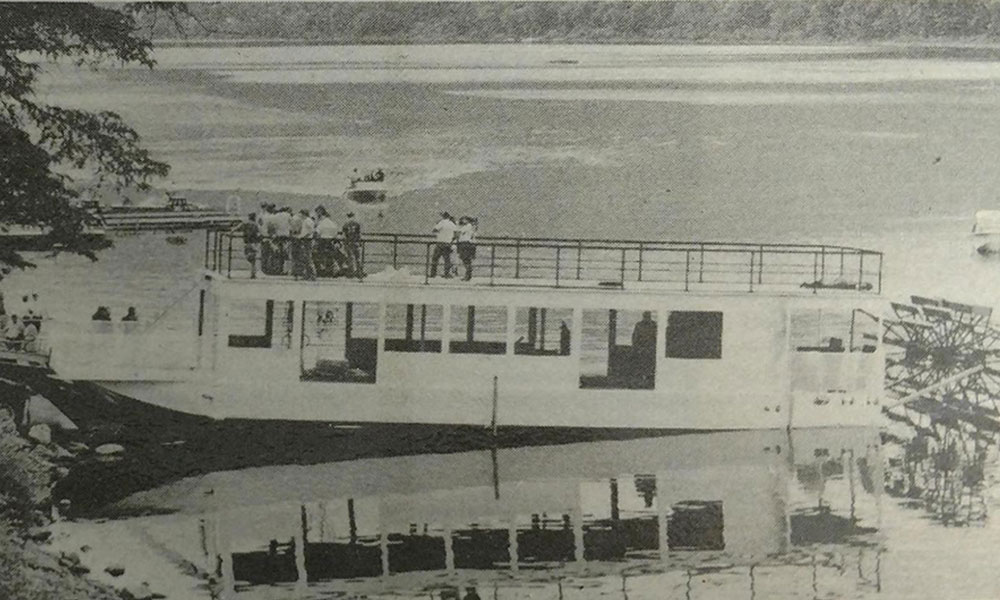 The Hiawatha paddleboat’s first tour, scheduled for last Friday night, was once again delayed, but organizers say the excursion will be made Tuesday. Windows, carpeting, some electrical work and additional plumbing must yet be completed, according to Donald G. Holtzman, the man credited with its conception. PADDLES and a wheel house were recently attached and the Hiawatha’s first voyage was conducted early last week as workers rode from the Antler’s Club to Susquehanna State Park. Holtzman said initial tests were conducted by the marine surveyor and the craft will be able to handle the estimated 150 persons per tour. More tests are to be conducted tomorrow, he said. before the Hiawatha is “totally certified.” “We are booked every night next week other than Monday,” Holtzman said. The actual distance of the two-hour tours has not yet been figured. A schedule has not been set either, according to Holtzman, but will be designed according to demand. Individual fares have been set at $4.75 for adults and $2.75 for children.

Hiawatha Plates Selling Nearly half of the 250 plates commemorating the original Hiawatha paddleboat have been sold by the Williamsport Rotary Club, according to member, Irv Levy. The first 10 numbers, he said, will be auctioned off to club members through sealed bids which must be submitted by Aug. 31. The plates will also be displayed at Memorial Park during the Susquehanna Boom Festival. 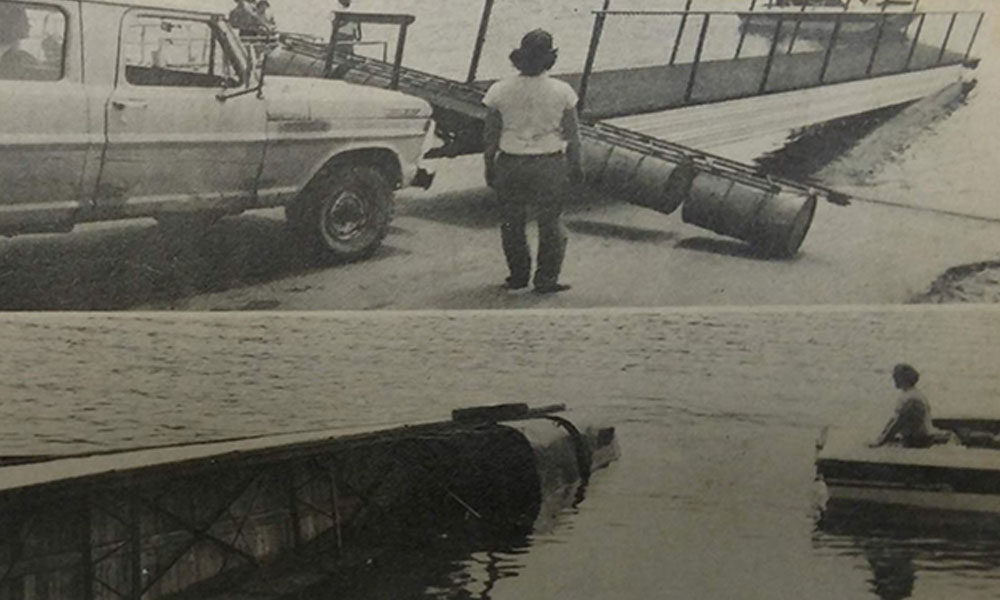 'First of Week' Target Date for Placing Hiawatha in River

While a date for the maiden voyage of the Hiawatha has not been established yet, Owen Stine, who will captain the riverboat, said today a target date has been set for placing the vessel in the Susquehanna. Barring any unforeseen problems and “as long as the weather holds out,” Stine said he is shooting for “the first of the week” to have the simulated paddlewheeler floating in the river for the first time. Stine, who is serving as the volunteer supervisor of the boat’s construction, said some minor work must be completed before the Hiawatha can be taken to the river. That work includes installing a bracket on which the paddlewheel will be mounted, connecting electrical wiring, and putting in an instrument console. The rough wiring already has been done.

After the Hiawatha is launched, other work on the boat will be completed, according to Stine. He estimated work on the boat is now 90 percent complete. Once the boat is put into the water and the paddlewheel is fitted in place, it will be ready for navgation, Stine said. The main dock for the 60,000 pould boat was floated down the river from the Antlers Club constuction site and moored at Susquehanna Park yesterday afternoon. Two walkways that will attach to the main dock still need to be floated to the land base at the park. One of the walkways capsized when it was placed in the river yesterday but it was not damaged. Stine explained that the end of the walkway that attaches to the concrete pad of the dock does not have flotation devices under it. The walkway was pushed too far into the water before a pontoon was placed underneath, Stine said, causing it to overturn. It was righted in the water a short time later, he added.

Once the three floating sections are in place at the park, it will be “just like walking on a sidewalk,” Stine said. In another matter, no word has been received on the funding for removing some of the estimated 352 old logging cribs that dot the river. Joseph G. Sidler, president of the Susquehanna River Assn., said he hopes to hear from the state Department of Environmental Resources in the next few days on whether DER will fund the removal of the stone and timber cribs with the more than $2 million expected to be unused in construction of a new damn at Hepburn Street. 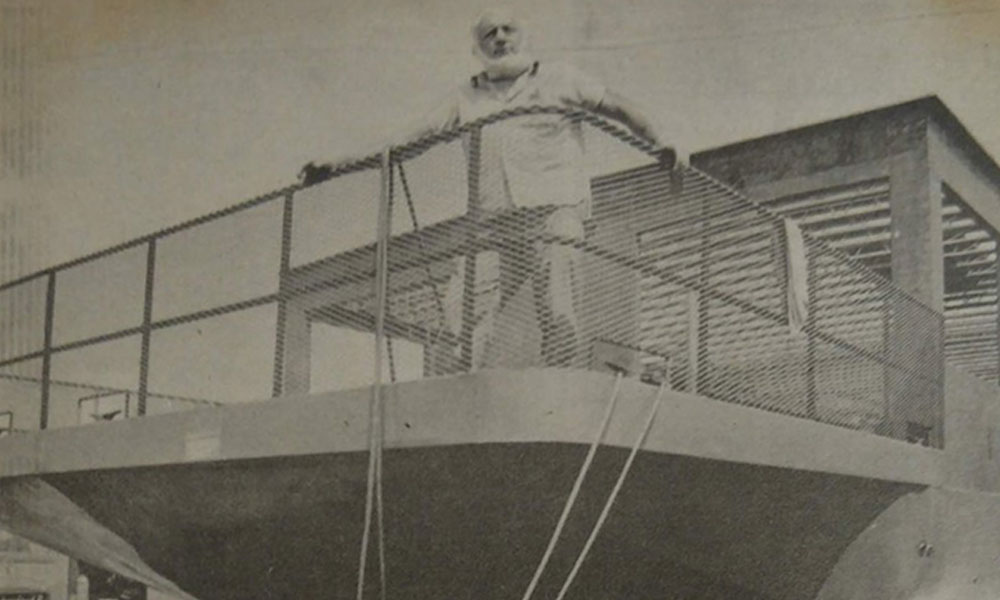 The captain of the Hiawatha paddleboat says “things are going smoothly” in the construction of the superstructure, but contends he really doesn’t have the volunteer forces to complete the project this month. “Before the boat was here people called,” said Owen Stine, Linden. “But four or five of ’em is all I ever saw and they were here for only a few evenings. I am kind of disappointed because we don’t have enough help. The former U.S. Navy seaman was led last year by the Williamsport-Lyoming Chamber of Commerce to oversee the project, to captain its ages and to supervise operations in the Susquehanna Park. Chamber officials originally figured the craft would be ready for launching by the end of June, but bad weather and delays in bringing the hull in from Tunnel Hill. Ga., pushed that date back to July 23.

Although several area industries have volunteered manpower, machinery and materials, Stine said a lack of individual volunteers from within the community has been the main factor in completion delays. “I’ve gotta build the boat, I’ve gotta build the trailer and I’ve gotta build the docks,’ he said. “I can’t go around hunting for people.” Stine said unless he receives more volunteers, the project is not likely to be completed before Aug. 1. “I need people other than welders –just everyday laborers,” he said. “I could do it if I just had the people.” Since the hull arrived several weeks ago, Stine has spent his mornings, afternoons and evenings working on the structure. He has received the aid of about five welders supplied by local industry and six Williamsport Area Community College students who are receiving credits as part of their technical training. He said only one person has actually volunteered on a full time basis. “Out of a whole city I think you can get more than one person,” he said. “I treat everybody well and thank them. But Kevin D. Keeley, chamber of commerce president, said more volunteers have been recruited, including several members of a local labor union. Keeley added that many others are still offering their services. “We’ve had an avalance of phone calls from peiple who would like to help,” said Keeley, adding emphatically that the boat could be ready for launching by July 23. Stine said the docks are about one third completed, but yet to be constructed are the craft’s second deck and a 7×7-foot wheel house.

Other unfinished work includes ceilings, paneling, restrooms, plumbing, electricity and painting. The 60,000 pound vessel must also be lifted onto a trailer that has yet to be built. According to Erin Walsh, chamber travel development director, the wheel house will be completed by a local company, which has volunteered its services. Despite the delays, the project does appear to be taking shape. The 65×120-foot rust-colored hull can be seen by passersby on Route 220. As crew continue work in a field owned by the Antler’s Club, Woodward Township. Originally in halves, the hull was welded together and the first deck is nearing completion. Officials estimate the boat will hold some 150 persons for weekend excursions, tours, receptions and private parties. The first floor, said Stine, will be carpeted and divided into three sections by sliding doors. The main section will be heated and enclosed, and will provide a 20×45-foot area for groups to gather.

An aluminum outdoor stairwell will lead to the secand deck, above which will be Be captain’s wheel. Chamber officials said they have booked about 20 tours in 1982 and Miss Walsh said fundraising efforts are successful thus far, although she said no indication is yet available of how much of the needed $175,000 has been raised. Over 100 persons have volunteered to solicit contributions, she said, and a total number of pledge dollars is expected by the end of the summer. In other developments, said Miss Walsh, the Army Corps of Engineers has granted permission to install electrical lines over the river dike for use at the park. Before the craft is officially launched, the Pennsylvania Fish Commission must conduct a test to determine how many persons the Hiawatha can actually accommodate.

Get in the Know

The Hiawatha, Inc. is a 501 C 3 not for profit organization and relies on community sponsors for each and every cruising season. We thank the many businesses for their financial support!